Originally (10) - see references below, the test consisted of continuous running back and forth between two lines 20 meters apart from each other within a given time. The time was shortened every 2 minutes, which therefore increased the running speed. Players had to run until their volitional limit at which they were not able to keep up with the running speed.

In 1988 (11, 13), a similar test was set up by the same authors. The test also consisted of 20 meter shuttles within a given time, however running speed was increased every minute (instead of every 2 minutes) by 0.5 km/h from a starting speed of 8.5 km/h.

The test was found to be reliable both in children and adults. The correlation between test and retest was high in both populations, r = 0.89 and r  = 0.95 respectively (The best possible score = 1).


Additionally, the validity of the test was shown to be high as well (r = 0.92), showing a high correlation between performance in the multistage 20m shuttle run test/beep test and a "true" VO2max measurement with a spirometry (2, 3, 7, 8, 15). Furthermore, strong correlations (r = 0.62, 0.70, and 0.70) were found between match performance parameters (high-intensity running, sprinting, and total distance covered respectively) in national youth football players (5).

For some reason, many of the most recent 20m multistage shuttle run test/Beep test differ little bit from the described original. The British National Coaching Foundation, the Australian Coaching Council and sources from Ireland utilize slight different versions (3, 17).

The British and Australian version starts at 8 km/h for stage one, increases the speed by 1 km/h for level two after one minute (therefore 9 km/h for level two) and thereafter every stage (and therefore after ~1 minute) increases its speed by 0.5 km/h. Due to the increasing speed a higher amount of shuttles need to be performed within each stage.

The existing iphone application seems to utilize the version from Ireland, starting at 8.0 km/hr and increasing by 0.5 km/hr for each one minute stage. There are different android applications, however, the ones we have seen, directly show the levels/shuttles, duration per stage and speed in the respective level/shuttle.

The following table (click to enlarge) details the British and Australian 20m multistage shuttle run test/Beep test version and can be used as guide to plan (and analyze) testing (data). Note. The test in the Eurofit Provisional Handbook seems to be the same test, however, the increase in speed is 0.14 m/s throughout all stages (while the British and the Australian one increases 0.28 m/s for the first stage). 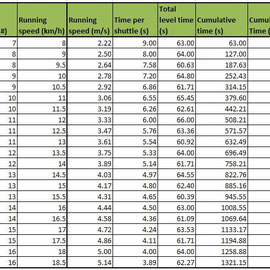 As shown in the figure above, a 20 meter distance need to be setup on the football pitch. All players will line up besides each other and depending on the number of player tested, the width of the test should be setup accordingly We believe that a 1-1.5m width per player is sufficient to run and turn. All players will be tested at the same time, following the speed given by an acoustic signal.

Therefore, equipment needed to use this test is:

The final score for a player is the last shuttle in a specific level after failing to reach a line for two successive shuttles (2).

It is possible to predict the VO2max from a 20m multistage shuttle run test/Beep test.

The equation of Ramsbotton et al. (13) was further used in professional (7), semi-professional (12) and amateur (2) footballers.

The 20m multistage shuttle run/beep test was correlated with:

Furthermore it was reported that there was no significant differences between the 20m multistage shuttle run test and a laboratory treadmill test in estimated VO2max and the YYIET level 1 (2).

2. Alemdaroglu, U., et al. Evaluation of aerobic capacity in soccer players: Comparison of field and